Brexit is inherently uncertain, but that does not mean that there cannot be any form of research into various options and the expected consequences for the Netherlands and the Dutch economy. Here we will discuss the most important general and sector-specific reports and useful tools/databases to prepare as well as you can and to stay up to date with the latest developments. 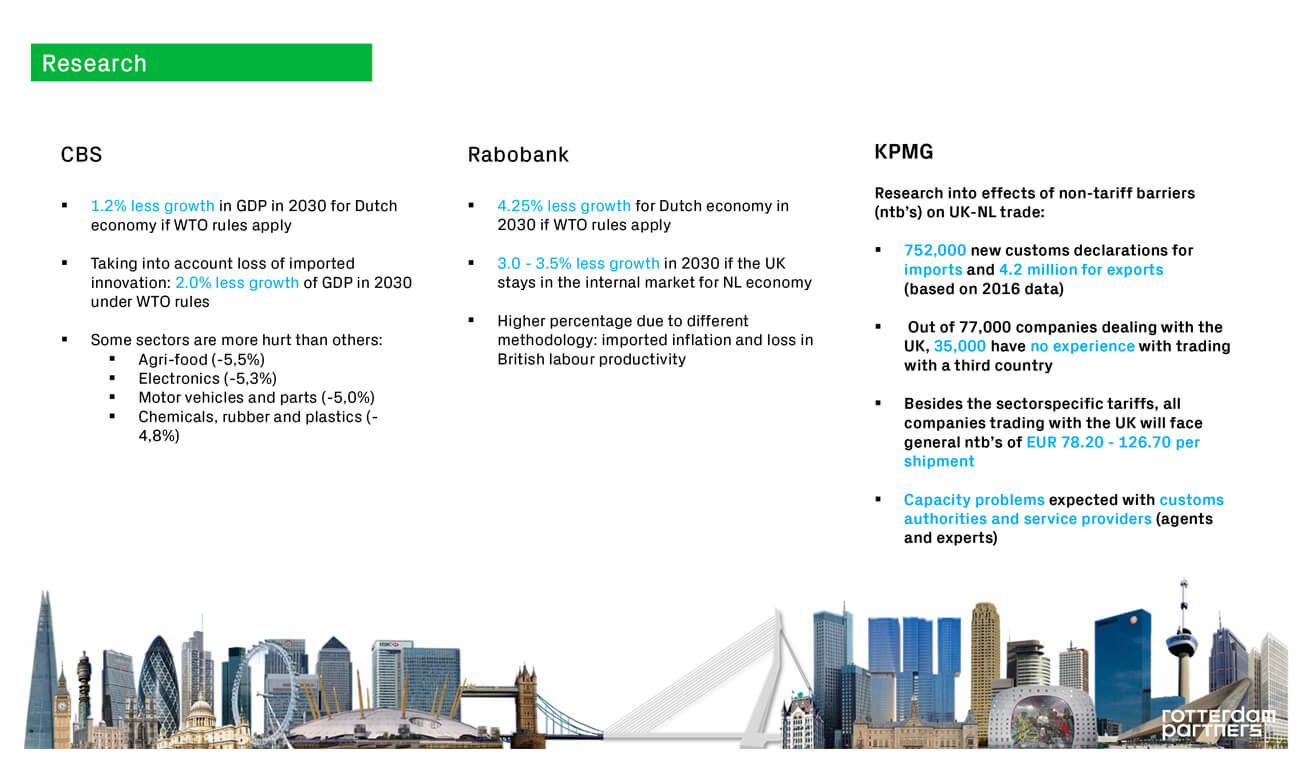 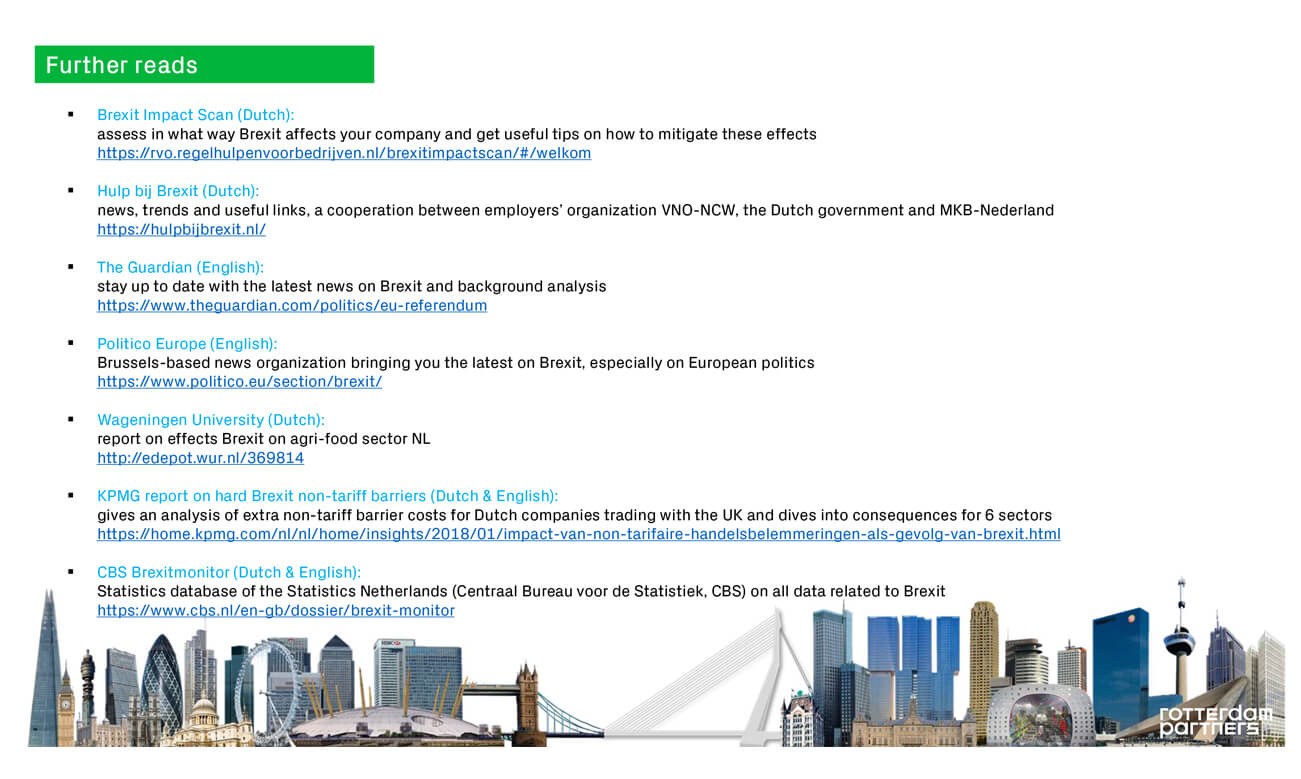 Statistics Netherlands (Centraal Bureau voor de Statistiek) and the Rabobank investigated the consequences of a Brexit based on a WTO scenario. Statistics Netherlands concluded that Brexit will cost the Dutch economy up to 1,2% of GDP (EUR 10 billion) in economic growth in 2030, due to the high degree of dependency on the British economy relative to other European economies.

Rabobank estimates an even larger fall in economic growth due to Brexit: up to 4,25% lower growth in 2030. The high estimate is caused by a different methodology: it considers imported inflation and a setback in British labour productivity in its analysis. Statistics Netherlands also offers a Brexit Monitor, in case you are interested in macroeconomic data related to Brexit.

The report written by KPMG, commissioned by the Ministry of Economic Affairs, focuses on the non-tariff costs of the hardest possible Brexit, where WTO rules would apply to trade between the UK and the EU. It considers 6 sectors in particular to elucidate the dynamics associated with trading with the UK based on WTO rules. Although the findings cannot be extrapolated to the entire economy, the report does serve as a useful starting point for Dutch companies that are trying to assess the impact of a hard Brexit on their cost structure. The report only considers non-tariff barriers (ntb’s), it does not take into account tariff barriers.

The 6 sectors assessed were: meat, cut flowers, paint, means of communication (mobile phones and routers/modems), fire extinguishers and accountancy. These 6 sectors were chosen since they provide for a useful overview of the different dynamics within sectors associated with post-Brexit trade based on WTO rules. The report emphasises that the results cannot be translated to other sectors one-on-one, however, it does provide for a helpful starting point.

The Dutch embassy in the UK offers a broad overview of sectors in which the Netherlands has a strong presence. Here you can find reports on the British market and relevant liaisons in your sector.

The agrofood sector (or: foods and drinks sector) is a clear example of a sector that will be affected by Brexit along multiple channels. Out of total Dutch exports of EUR 469 billion in 2017, EUR 91.7 billion consisted of exports in agricultural products (19.6%): agrofood is very important to Dutch exports. The UK is the third largest export partner within this sector: in 2017 EUR 8.7 billion in agricultural products was exported to the UK. Brexit does seem to cast its shadow ahead due to the devaluation of the sterling: the 1% growth in exports to the UK is significantly slower than the 7% increase in total exports of agricultural products. Relatively low margins in combination with import tariffs could significantly affect competitiveness of Dutch exports on the UK market. Long queues at customs by the separation of the UK from the internal market could pose problems to perishable goods. Furthermore, diverging quality demands could lead to extra checks, implying extra costs and

delays in your supply chain. Branch organisations could help you with Brexit. For the agrofood sector these are: 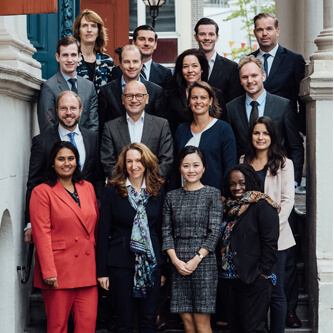 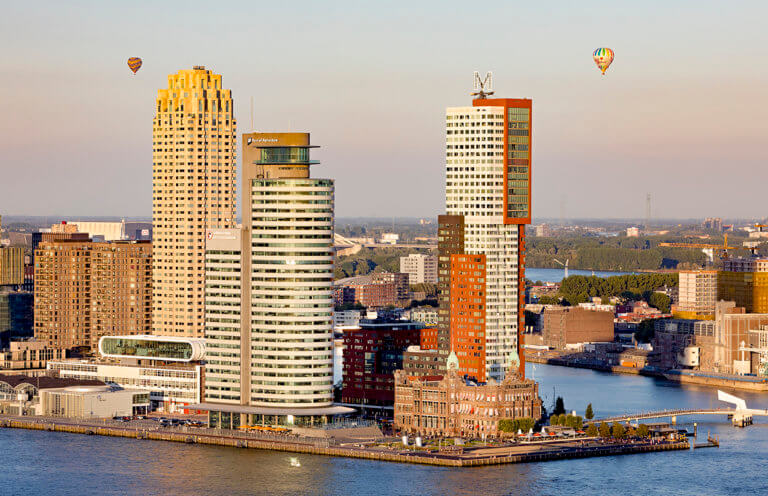